The virginal is a small harpsichord with a single keyboard and a single register. As a technical solution to the problem of reducing the dimensions of the instrument, the keyboard is on the instrument’s side, not at its end.

The strings lie in a transverse manner, or perpendicular to the keyboard. Such instruments were built by all the schools in a variety of designs.

Italian and Flemish instruments can have either a rectangular or a polygonal form, and they can sometimes be built to speak at 4′, at 6′, or even at 2′ pitch.

They have a very percussive timbre, somewhat resembling the lute, with a rapid decay. The small dimensions of these instruments have no relation to their volume, which is frequently quite penetrating.

To even the touch, which was not equally balanced in either rectangular or polygonal virginals, another form was developed.

It was adopted by the German, French, and especially the English schools in the eighteenth century, where it was then commonly called the spinet, or sometimes a “bentside” or “dog-leg” spinet. 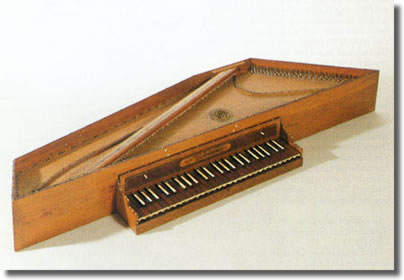